Thank you! Your submission has been received!
Oops! Something went wrong while submitting the form.

FontLab 8 is an integrated font editor for Mac and Windows that helps you create fonts from start to finish, from a simple design to a complex project, and brings a spark of magic into type design. Try FontLab 8 for free for 10 days, and start making fonts today! 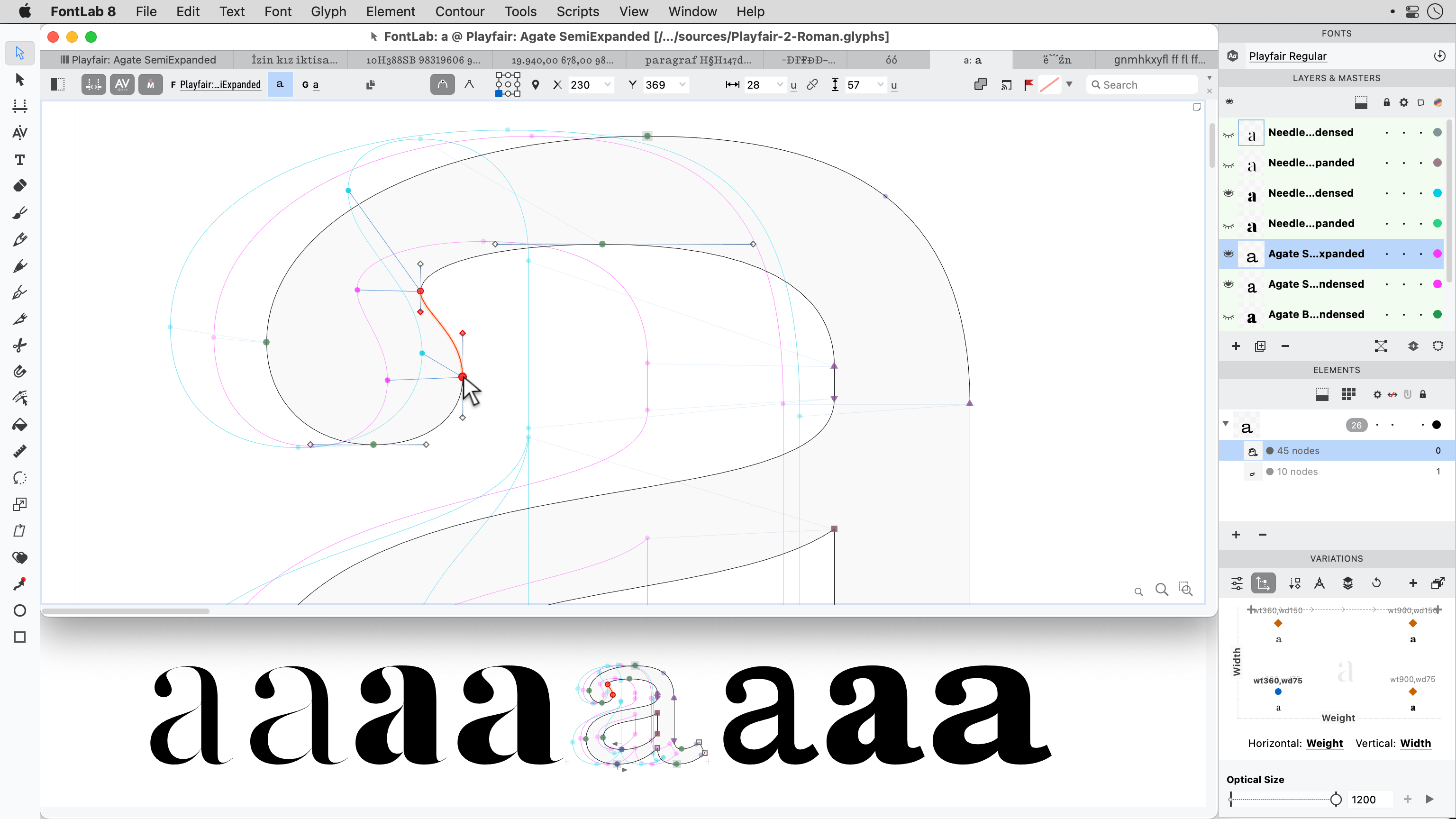 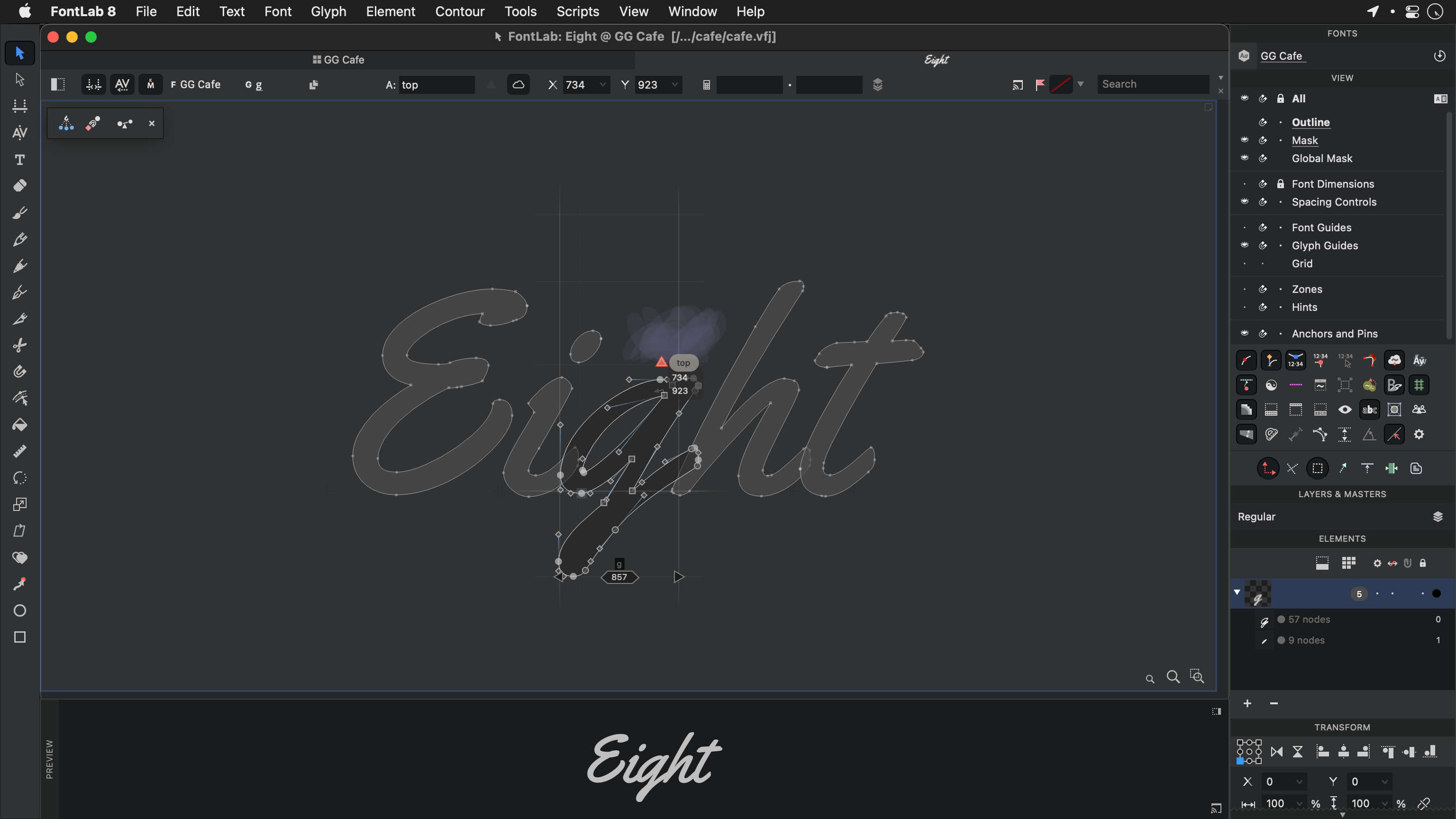 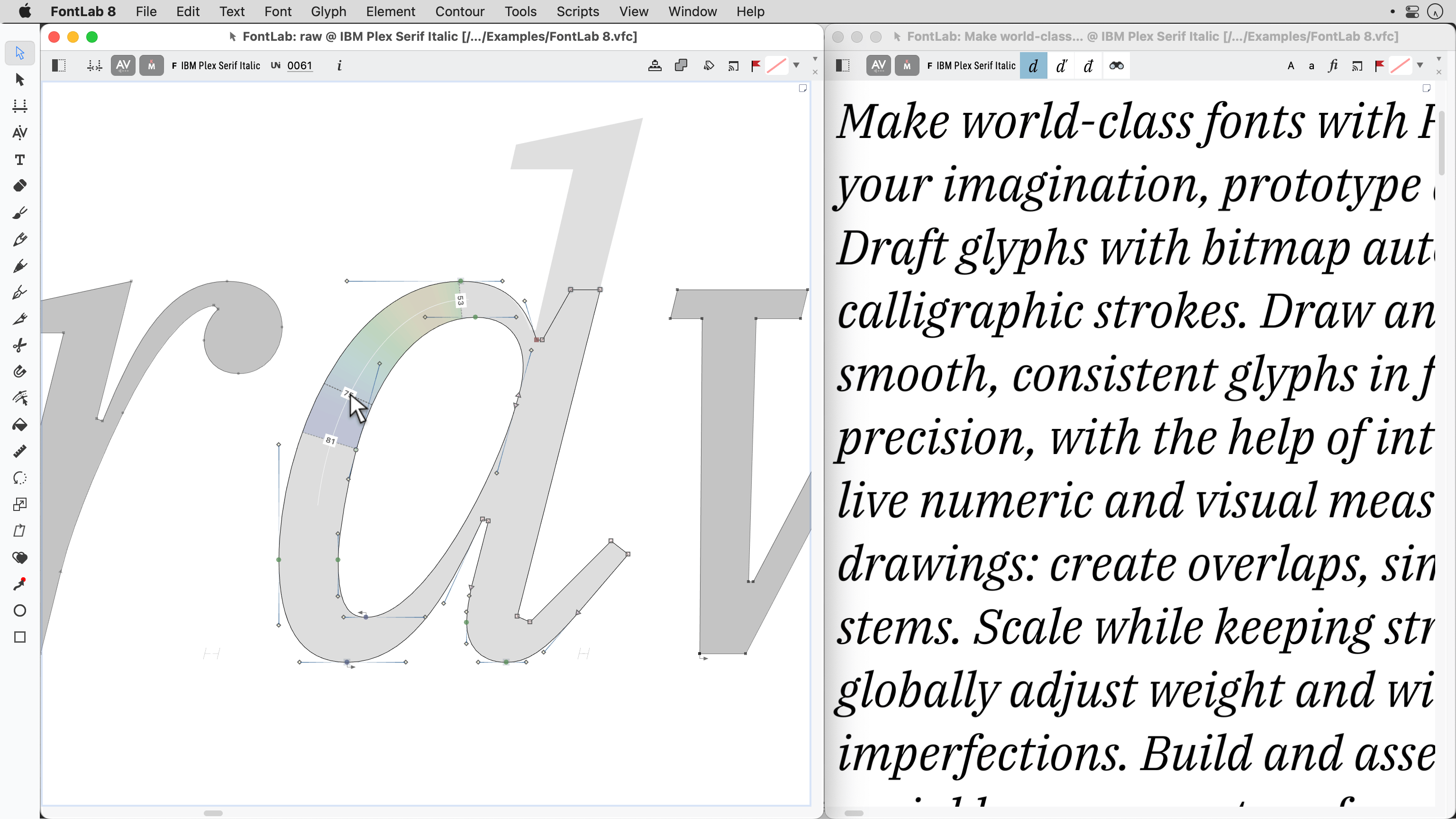 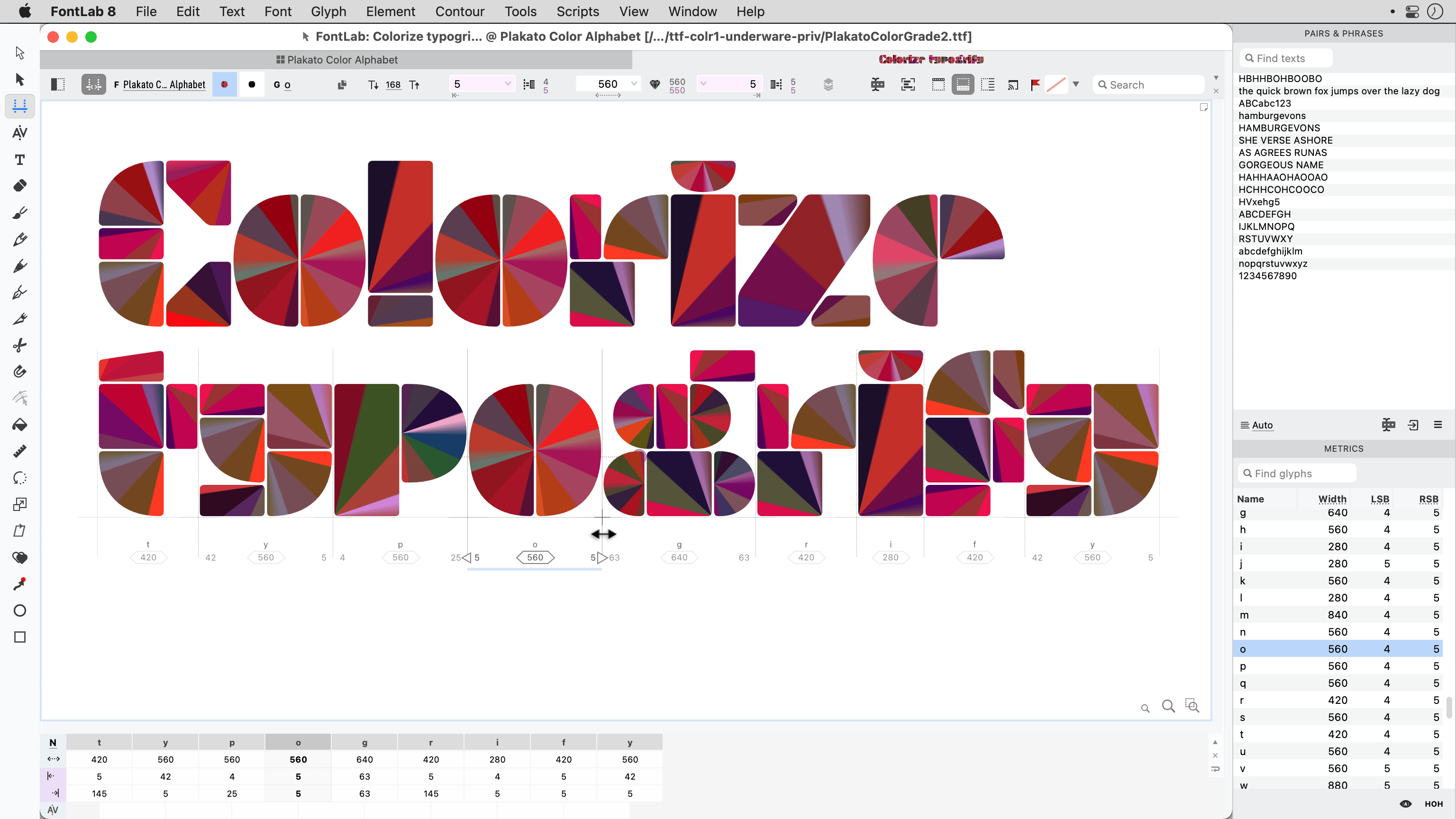 “without FontLab,
I could do just about nothing”
‍Dave Lawrence

‍Draw and edit beautiful, smooth, consistent glyphs in fractional or integer precision, with the help of intelligent snapping and live numeric and visual measurements.

Build and assemble glyphs from variable components or from self-adjusting segment or corner skins. Add accented glyphs with a simple double-click.

‍Space and kern in multi-line tabs or windows that feel like a text editor.

Give text a voice

Explore new directions with color and variation. Extend and complete any font in FontLab, or in mix with other font editors.

Interchange with other font editing apps like FontForge, RoboFont or Glyphs. Supercharge your workflow with powerful add-ins and Python 3 scripts.

FontLab has been the go-to app for professional typeface designers to make smooth and consistent curves, comfortably tweak, space and kern a typeface, and then export technically solid fonts in any format. With FontLab 8, we’ve thoroughly revised and modernized every aspect of our powerful, versatile font editor. FontLab 8 has over 500 improvements: it’s easier to learn and use, it’s better, and it’s faster.

Relax your eyes with the new dark or refined light interface theme. Group panels into a vertical infinite, scrollable panel dock, and intuitively navigate between the panels.
Adjust numeric values with sliders and calculations. Boost your productivity with up to 8× improved performance.
Read More

Convert selections to components or elements. Add decoration and attach shapes to nodes or segments with updated Glue filter, or with .glyphs-compatible Skin filter in segment, dash, corner and cap modes.
Use clipping groups to mask out areas. Use text shapes to re-use scaled words or phrases from your font in existing glyphs.
Read More

Use your mouse or trackpad to adjust metrics and kerning with high-precision Lever dragging.
Hide or reduce the visibility of spacing controls for distraction-free spacing and kerning.
Auto-space and auto-kern with one click or tap.
Read More

Write and use Python 3 scripts. Seamlessly interchange with other font editing apps like Glyphs or RoboFont.
Perform global transformations with the powerful TypeRig library. Create fonts for the entire Unicode 14 standard.
Read More

Ready to make your first font?

Thank you! Your submission has been received!
Oops! Something went wrong while submitting the form.

From novice to pro. From start to finish.

Love type design and font making? FontLab 8 has you covered!

Work with blazing speed with even most complex contours thanks to FontLab’s optimized architecture.

Customize FontLab’s interface to your needs, and easily navigate it with the intuitive Quick Help system: hover and hold F1.

Paste and import PDF, EPS & SVG vector artwork with monochrome, color or gradient fills and strokes, as well as scanned character sets or color bitmap glyphs. Turn them into monochrome fonts via customizable autotracing, or into color OpenType fonts.

Drag some nodes and have other nodes or handles follow intelligently with Power Nudge and handle Nudge. Drag without zooming in for small adjustments with Lever precision dragging.

Convert between the curve types with adjustable precision.

Work on a purely integer grid, or scale, rotate and slant losslessly thanks to FontLab’s fractional drawing precision and live integer rounding, apply the rounding to bake in the integers.

Build glyphs from Components that point to other glyphs, or from Element References that cross-reference each other and can be edited anywhere they appear.

Decompose a component and unlink a reference to make local changes only.

Use Auto layers to build predefined glyphs and keep them automatically updated.

Kern between classes and glyphs in a UFO- and OpenType-compatible way, with exceptions. Audit kerning to find combinations that produce visual conflicts.

Use Preview panel to view current and custom text in current, all or visible masters, waterfalls, composites and anchor groups.

Print a glyph map from the Font window; words, phrases and texts from the Glyph window; waterfalls and masters from the Preview panel.

Preview Windows screen rendering with built-in genuine Microsoft ClearType, even on the Mac.

Paste and import PDF & SVG vector artwork with color or gradient fills and strokes, and color images in a variety of formats.

Write and use Python 3 scripts.

Download the GetGo Fonts for FontLab and use them as inspiration or templates for your own font. GetGo Fonts is a curated collection of free and opensource designs that range from simple sanserif and serif designs to multi-axis variable font projects and world script fonts.

Most fonts that are bundled with Microsoft Windows or with the Apple systems (macOS, iOS) were designed in our apps!

Designers and foundries have used FontLab to create fonts in all flavors and for various world scripts. Check out some of the highlights below, and visit our Testimonials to read what designers say about the newest FontLab!

Color fonts like the titling font for the Joker movie by Chad Danieley.

Ready for the next level?

From FontLab 7
US$ 149
Free if you bought FontLab 7
on 20 April 2022 or later
BUY NOW
From other font editors
US$ 459
FontLab Studio 5, FontLab VI, TypeTool, Fontographer, RoboFont, Glyphs
BUY NOW